Monkey and Me - Librarian’s choice

Librarian’s Book choice
This is a completely new departure for the author of the Danger Zone teenage thrillers, but a very welcome one since we desperately need writing of this quality for this younger age group. As a successful screen writer, too, it is perhaps no surprise that he can create such convincing characters and has such an ear for authentic dialogue.

Beanie, the narrator is nine years, eleven months and seven days at the start of the book and thus can only be a probationary member of his brother’s gang until he is in double digits. Beanie never bothers to actually tell you he has leukaemia, but that reiteration of his age throughout the story and the subtly triumphant way he notes his increasing age becomes genuinely moving. The Beanie nickname for Jez is explained - it is because of the beanie hat that he always wears, but again he does not go on to state explicitly that he has lost his hair - we work that out for ourselves.

All these little gaps that a reader has to fill in for themselves felt very authentic to me. Jez is genuinely not dwelling on his circumstances; he is trying to live his life to the full. As a nine year old he is only peripherally aware of what the adults are going through. He is more aware of the sacrifices his older brother makes and is occasionally shamefaced about exploiting the advantages his circumstances give him.

For many young readers, just like Jez himself, the main element of the story will be about the gloriously named Malcolm, the chimp that he discovers in a scary, empty house when trying to prove himself to the gang and the hilarious adventures that ensue. But Jez’s determination to save Malcolm increasingly puts his own life in jeopardy and the reader will race to the nail-biting conclusion.

Some very serious, thought-provoking issues are tackled with a very skilful, light and humorous touch making this is a book to appeal to many different audiences and be read on many different levels. 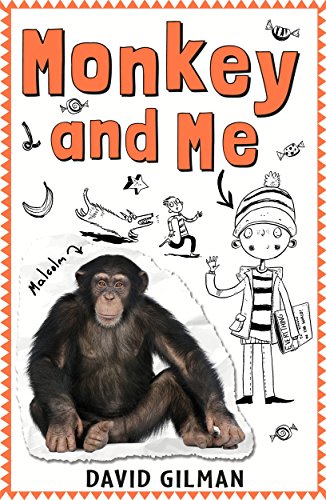 Buy Monkey and Me